What is a Power Amplifier? Types, Classes, Applications

What is a Power Amplifier? Types, Classes, Applications

An amplifier is an electronic device used to increase the magnitude of voltage/current/power of an input signal. It takes in a weak electrical signal/waveform and reproduces a similar stronger waveform at the output by using an external power source.

Depending on the changes it makes to the input signal, amplifiers are broadly classified into Current, Voltage and Power amplifiers. In this article we will learn about power amplifiers in detail.

What is a Power Amplifier?

In this case a microphone is used as an input source. The magnitude of signal from the microphone is not enough for the power amplifier. So first it is pre-amplified where its voltage and current are increased slightly. Then the signal is passed through tone and volume controls circuit which makes aesthetic adjustments to the audio waveform. Finally the signal is passed through a power amplifier and the output from power amp is fed to a speaker.

Depending on the type of output device that is connected, power amplifiers are divided into the following three types.

This type of power amplifiers are used for increasing the magnitude of power of a weaker audio Signal. The amplifiers used in speaker driving circuitries of televisions, mobile phones etc. come under this category.

Wireless transmissions require modulated waves to be sent over long distances via air. The signals are transmitted using antennas and the range of transmission depends on the magnitude of power of signals fed to the antenna.

For wireless transmissions like FM broadcasting, antennas require input signals at thousands of kilowatts of power. Here, Radio Frequency Power amplifiers are employed to increase the magnitude of power of modulated waves to a level high enough for reaching required transmission distance.

DC power amplifiers are used to amplify the power of a PWM(Pulse Width Modulated) signals. They are used in electronic control systems which need high power signals to drive motors or actuators. They take input from microcontroller systems, increase its power and feed the amplified signal to DC motors or Actuators.

There are multiple ways of designing a power amplifier circuit. The operation and output characteristics of each of the circuit configurations differs from each other.

To differentiate the characteristics and behaviour of different power amplifier circuits, Power Amplifier Classes are used in which letter symbols are assigned to identify the method of operation.

The most commonly used power amplifiers are the ones that are used in audio amplifier circuits and they come under classes A, B, AB or C. So let’s take a look at them in detail.

Analog waveforms are made up of positive highs and negative lows. In this class of amplifiers, the entire input waveform is used in the amplification process.

A single transistor is used to amplify both the positive and negative halves of the waveform. This makes their design simple and makes class A amplifiers the most commonly used type of power amplifiers. Although this class of power amplifiers are superseded by better designs, they are still popular among hobbyists.

In this class of amplifiers, the active element (the electronic component used for amplifying, which is transistor in this case) is in use all the time even if there is no input signal. This generates lot of heat and reduces the efficiency of class A amplifiers to 25% in normal configuration and 50% in a transformer coupled configuration.

The conduction angle (the portion of waveform used for amplification, out of 360°) for class A amplifiers is 360°. So the signal distortion levels are very less allowing better high frequency performance.

Class B power amplifiers are designed to reduce the efficiency and heating problems present in the class A amplifiers. Instead of a single transistor to amplify the entire waveform, this class of amplifiers use two complementary transistors. 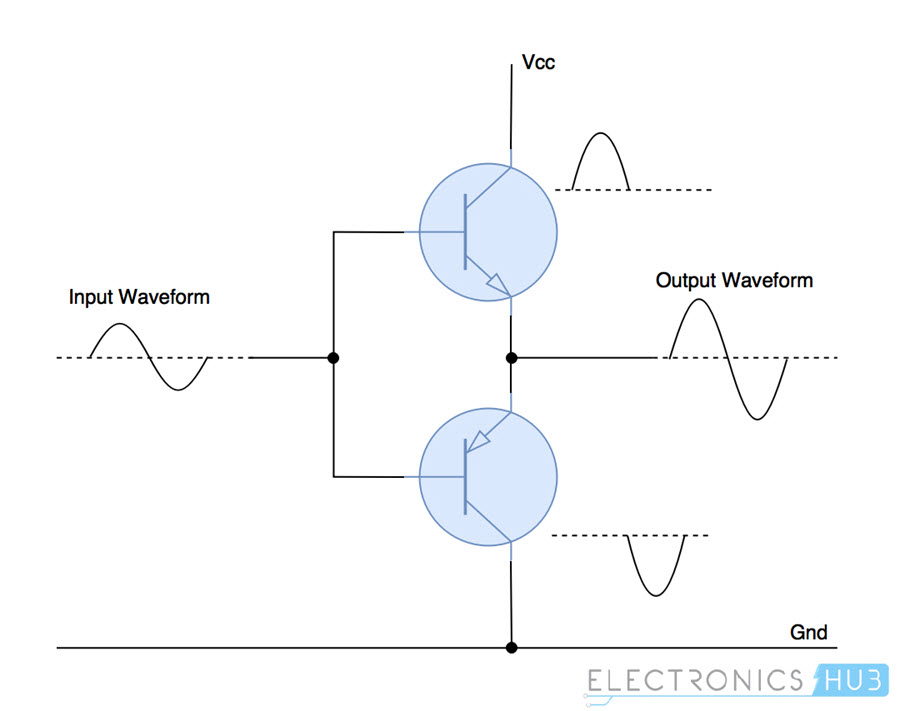 Because of superposition of two halves of the waveform, there exists a small distortion at the crossover region. To reduce this signal distortion, class AB amplifiers are designed. 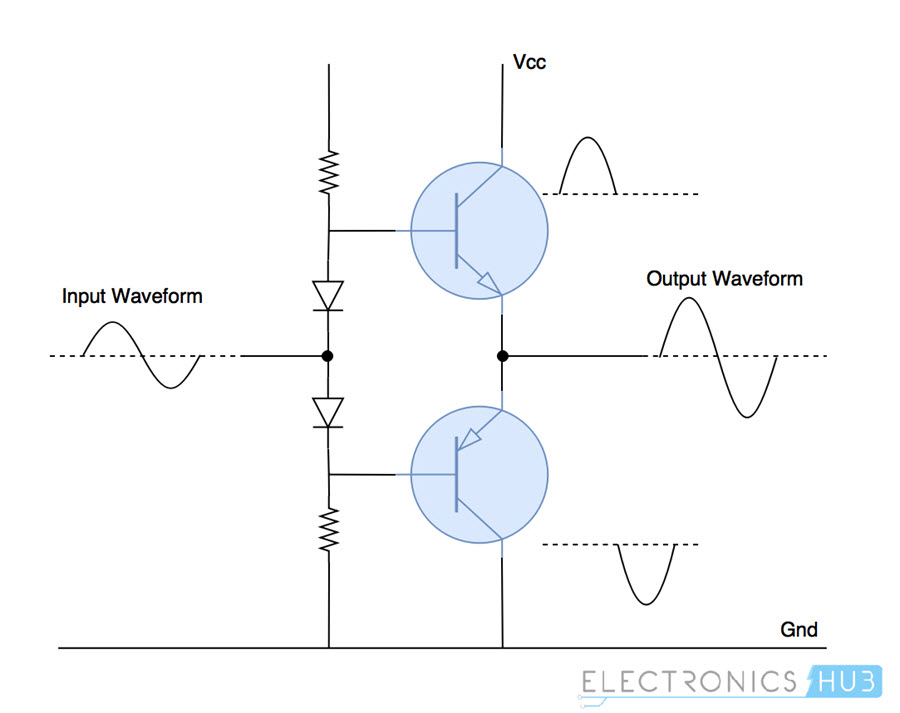 It maintains high frequency response like in class A amplifiers and good efficiency as in class B amplifiers. A combination of diodes and resistors are used to provide little bias voltage which reduces the distortion of waveform near the crossover region. There is a little drop in efficiency (60%) because of this.

The design of class C power amplifiers allows greater efficiencies but reduces the linearity/conduction angle, which is under 90°. In other words, it sacrifices quality of amplification for increase in efficiency.

Lesser conduction angle implies greater distortion and so this class of amplifiers are not suited for audio amplification. They are used in high frequency oscillators and amplification of Radio Frequency signals.

Class C amplifiers generally contain a tuned load which filters and amplifies input signals of certain frequency, and the waveforms of other frequencies are supressed. 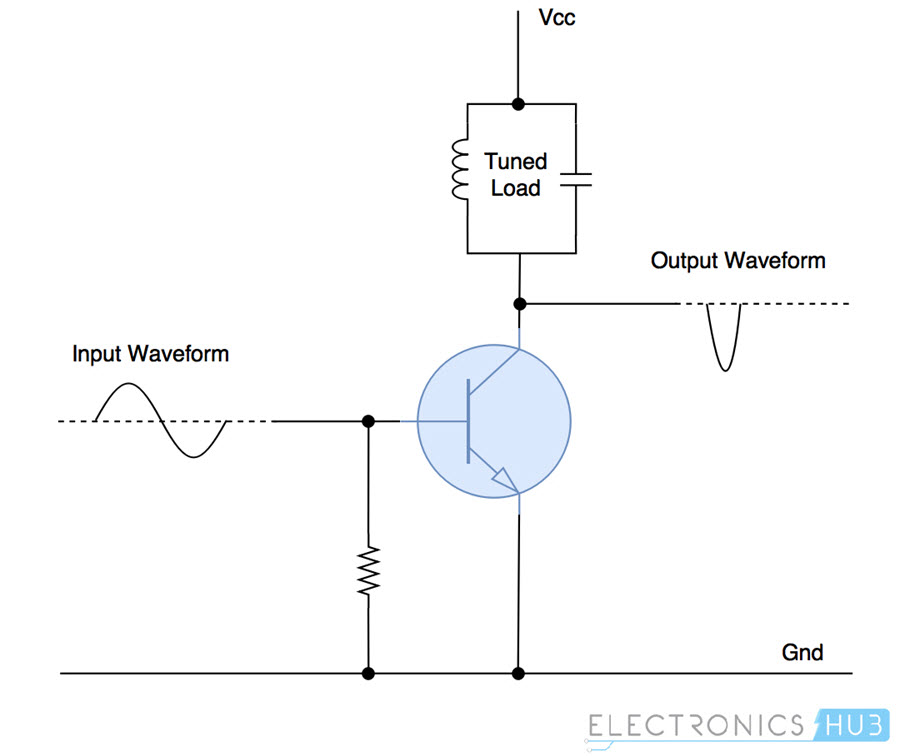 In this type of power amplifier, the active element conducts only when the input voltage is above a certain threshold, which reduces power dissipation and increases efficiency.

Power amplifier classes D, E, F, G etc. are used to amplify PWM modulated digital signals. They come under the category of switching power amplifiers and turn the output either constantly ON or constantly OFF without any other levels in between.

Because of this simplicity, power amplifiers falling under the above mentioned classes can reach theoretical efficiencies of upto (90-100)%.

Below are the applications of power amplifiers across different sectors: