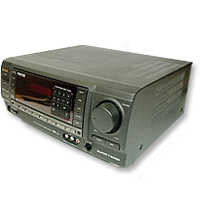 When people refer to “amplifiers,” they’re usually talking about stereo components or musical equipment. But this is only a small representation of the spectrum of audio amplifiers. There are actually amplifiers all around us. You’ll find them in televisions, computers, portable CD players and most other devices that use a speaker to produce sound.

Electronic sound equipment works the same basic way. It represents sound as a varying electric current. Broadly speaking, there are three steps in this sort of sound reproduction:

As you can see, all the major components in this system are essentially translators: They take the signal in one form and put it into another. In the end, the sound signal is translated back into its original form, a physical sound wave.

­ In order to register all of the minute pressure fluctuations in a sound wave, the microphone diaphragm has to be extremely sensitive. This means it is very thin and moves only a short distance. Consequently, the microphone produces a fairly small electrical current.

This is fine for most of the stages in the process — it’s strong enough for use in the recorder, for example, and it is easily transmitted through wires. But the final step in the process — pushing the speaker cone back and forth — is more difficult. To do this, you need to boost the audio signal so it has a larger current while preserving the same pattern of charge fluctuation.

This is the job of the amplifier. It simply produces a more powerful version of the audio signal. In this article, we’ll see what amplifiers do and how they do it. Amplifiers can be very complex devices, with hundreds of tiny pieces, but you can get a clear picture of how an amplifier works by examining the most basic components. In this next section, we’ll look at the basic elements of amplifiers.­

In the last section, we saw that an amplifier’s job is to take a weak audio signal and boost it to generate a signal that is powerful enough to drive a speaker. This is an accurate description when you consider the amplifier as a whole, but the process inside the amplifier is a little more complex.

In actuality, the amplifier generates a completely new output signal based on the input signal. You can understand these signals as two separate circuits. The output circuit is generated by the amplifier’s power supply, which draws energy from a battery or power outlet. If the amplifier is powered by household alternating current, where the flow of charge changes directions, the power supply will convert it into direct current, where the charge always flows in the same direction. The power supply also smoothes out the current to generate an absolutely even, uninterrupted signal. The output circuit’s load (the work it does) is moving the speaker cone.

In most amplifiers, this load is too much work for the original audio signal. For this reason, the signal is first boosted by a pre-amplifier, which sends a stronger output signal to the power amplifier. The pre-amplifier works the same basic way as the amplifier: The input circuit applies varying resistance to an output circuit generated by the power supply. Some amplifier systems use several pre-amplifiers to gradually build up to a high-voltage output signal.

So how does the amplifier do this? If you look inside an amplifier for an answer, you’ll only find a complex mass of wires and circuitry components. The amplifier needs this elaborate setup to make sure each part of the audio signal is represented correctly and accurately. Hi-fidelity output requires very precise control.

All of the pieces in an amplifier are important, but you certainly don’t need to examine each one to understand how an amplifier works. There are only a few elements that are crucial to the amplifier’s functioning. In the next section, we’ll see how these elements come together in a very basic amplifier design.

The component at the heart of most amplifiers is the transistor. The main elements in a transistor are semiconductors, materials with varying ability to conduct electric current. Typically, a semiconductor is made of a poor conductor, such as silicon, that has had impurities (atoms of another material) added to it. The process of adding impurities is called doping.

In pure silicon, all of the silicon atoms bond perfectly to their neighbors, leaving no free electrons to conduct electric current. In doped silicon, additional atoms change the balance, either adding free electrons or creating holes where electrons can go. Electrical charge moves when electrons move from hole to hole, so either one of these additions will make the material more conductive. (See How Semiconductors Work for a full explanation.)

The free electrons in the n-type layers naturally want to fill the holes in the p-type layer. There are many more free electrons than holes, so the holes fill up very quickly. This creates depletion zones at the boundaries between n-type material and p-type material. In a depletion zone, the semiconductor material is returned to its original insulating state — all the holes are filled, so there are no free electrons or empty spaces for electrons, and charge can’t flow. When the depletion zones are thick, very little charge can move from the emitter to the collector, even though there is a strong voltage difference between the two electrodes.

A single transistor like this represents one “stage” of an amplifier. A typical amplifier will have several boosting stages, with the final stage driving the speaker.

The goal of a good amplifier is to cause as little distortion as possible. The final signal driving the speakers should mimic the original input signal as closely as possible, even though it has been boosted several times.

This basic approach can be used to amplify all kinds of things, not just audio signals. Anything that can be carried by an electrical current — radio and video signals, for example — can be amplified by similar means. Audio amplifiers seem to catch people’s attention more than anything else, however. Sound enthusiasts are fascinated with variations in design that affect power rating, impedance and fidelity, among other specifications.