As opposed to foreground music, background music can bathe your customers in luxurious, plush sounds that will allow them to enjoy their experience while focusing on their work or your merchandise. Research has shown that background music, though many times not consciously noticed by customers, has psychological effects on people and can lead to increased time in stores and increased sales.

Fitness centers, health spas, bars, and fitting rooms are places where creating a relaxing environment with a background music system can influence your customers’ behavior. One study showed that music played in a dentist office reduced the anxiety and stress levels of females while undergoing “a crown preparation procedure,” however, there were no significant effects on males. Goff, L.C., Pratt, R. R. & Madrigal, J. L. (1997)

In another study testing the effects of a background music system, it was found that playing French music lead to French wine outselling German wine 3 to 1 but when German music was played, German wine outsold French wine 2 to 1. When questioned about their purchases, they claimed to be unaware of any effects and denied being influenced by the music. A. North, D. Hargreaves and J. McKendrick (1999) – The Influence of In-Store Music on Wine Selection
A background music system will attract and prolong customer visits. It has been shown that there is a link between tempo of music and the activity of customers in different settings. In a grocery store, it took customers longer to move between two defined points when slow music was played than when fast music was played. More money was spent under the slower music conditions, perhaps because of the longer amount of time in the store. Millman (1982)

USA: North Metro Church in Marietta, Georgia, is an inclusive house of worship where a dynamic array of music is a key part of its ser...
Read More

Pike County Emergency Management began using a new mass notification system for emergencies throughout the county. The goal is to redu...
Read More 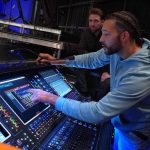 World Harvest Church is a big deal. The 122,000-square-foot main building is home to a sanctuary that seats over 5,200 people and cont...
Read More
Contact Us